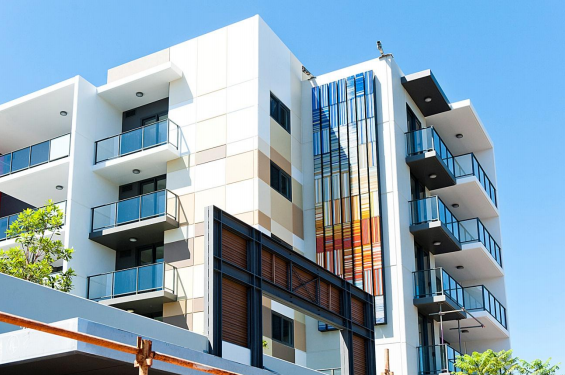 Perth, 25 February 2014: Western Australia’s leading apartment developer Finbar Group Limited (ASX:FRI) (Finbar or the Company) is pleased to advise that the Company’s Ecco joint venture project has reached a stage of practical completion.
The Ecco project located on the corner of Lord Street, Summers Street, and Coolgardie Terrace in Perth, consists of 90 luxury 1, 2 and 3 bedroom apartments plus 8 commercial lots.
Finbar has secured sales of $46.3 million from all 90 residential apartments with eight commercial lots valued at $6.5 million remaining to be sold. Final site presentation is underway with the removal of scaffolding from the commercial façade to allow the commencement of a marketing campaign for the sale of the remaining eight commercial lots.
It is anticipated that settlements will commence in April 2014. The sales revenue from the 90 pre-sales is expected to be a large contributor to Finbar’s second half earnings in FY14.
The project’s unique public art, which is affixed to the façade of the main structures, has a daytime and a night presence with a LED display that is themed around the idea of the horizon. The lightboxes reference the sky through the use of colour and are an impressive focal point for the building and an area that has been lacking in new development activity.
Finbar Managing Director Darren Pateman said, “Ecco has been completed on time and within feasibility budget which is always a pleasing result for the Company and our first time joint venture partners, Swanline. We look forward to continuing our JV relationship with Swanline as we work to produce a successful outcome for Finbar’s Norwood project located only 300 metres away.”