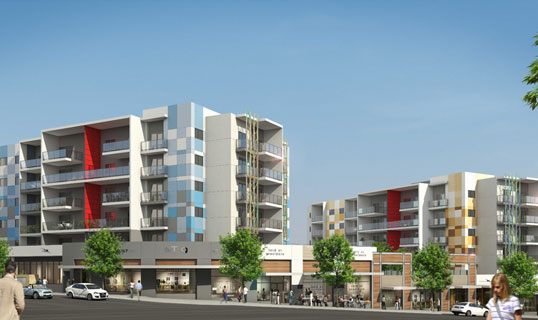 A new addition to the apartment market at the northern entrance to the city is being planned hy Finbar and the Swanline Group.
The property developers have received development approval for 90 apartments and eight commercial lots on a site bounded by Lord and Summers streets and Coolgardie Terrace in Highgate.
Finbar and Swanline formed a joint venture this year to build the apartments on three blocks of rezoned land owned by Swanline. Finbar will build the apartments and each group will share in the development profit for the project which will have an end value of $50 million.
Marketing for the six and seven- storey apartment buildings, with one, two and three-bedroom apartments, starts within months. The towers on the 4682sqm site will be separated by communal pool deck, spa, gym and residents’ lounge.
The commercial lots on the street frontage are expected to house cafes, shops and offices to make the most of street-level interaction around the complex, opposite nib Stadium and in an area primed for residential regeneration.
Train stations are within walking distance and the corner site is also close to the central business district and the freeway.
Finbar managing director Darren Pateman said the project was in keeping with Finbar’s core apartment philosophies of providing a product that offered residents convenience, lifestyle and value for money
“We are confident this will continue to reflect in results generated for our shareholders and jo int-venture partners,” Mr Pateman said.