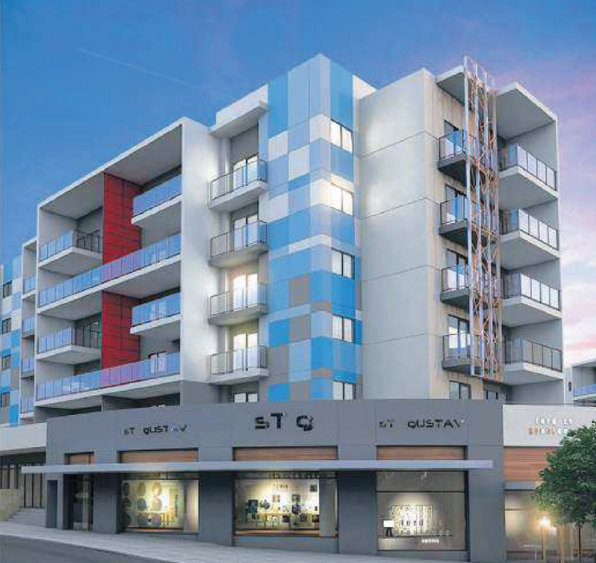 Construction work has begun on the new Ecco Apartments development in Perth.
The five-level complex is being built on a site bordered by Lord Street, Coolgardie Terrace and Summers Street,
It will include 90 one, two and three-bedroom residential units in two separate buildings.
There will also be eight, ground-floor commercial units, including a cafe, while common amenities include a swimming pool, gym, sauna and residents’ lounge.
Ecco is a joint venture between Finbar and Swanline Group and is being marketed by McGees Property and Burgess Rawson.
Robin Schneider of McGees Property said more than 70 per cent of the complex had already been sold off-the-plan.
‘It’s been a great success already;” Mr Sclmeider said. “It’s been very well received.
“It’s a very high-quality complex. Fixtures and finishes include stainless-steel appliances, glass splashbacks and stone benches in the kitchens. The bedrooms and living areas have split-system air-conditioners.
“The complex will also have a lobby with keyless entry, lift access and two levels of basement security parking.”
One-bedroom apartments are priced from $355,000, two-bedroom $479,000 and three-bedroom $570,000. “There is only one three-bedroom, two-bathroom left for $635,000. There are also a few one-bedrooms left from $410,000 and we still have two-bedroom, two-bathroom apartments available from $520,000,”Mr Schneider said.
The majority of sales so far had been to owner-occupiers.
“It is also a great spot for investors. We expect the rental returns to be very high in this sort of product in this sort of area.”
Chris Tonich, of Burgess Rawson, said the location had also been a big attraction to buyers.
“You have the major redevelopment of Nib stadium well underway just across the road,” Mr Tonich said.
“East Perth and Claisebrook train stations are both within walking distance and it is close to the CBD, the freeways, Northbridge and the Highgate/Mt Lawley cafe strip.”
Construction is expected to be completed early next year.